Things Not To Do On Social Media #243: Do Not Take Sides

Usain Bolt, currently the fastest man on the planet is also probably one of the most marketable athlete in the world. With brands around the globe just lining up for his endorsement, there are just some things that you cannot do on social media - taking sides.

Though it's not a crime to express a liking for a particular football team, you cannot down play or "insult" the other opponent's team as it is often seen as disrespect and cheap.

In this case, Usain Bolt who just posted a picture of him together with Arsenal legend, Thierry Henry. 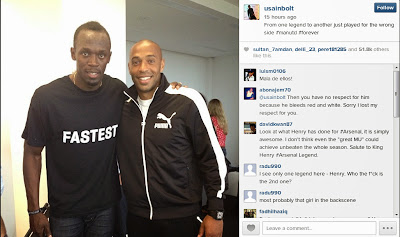 The problem is, Bolt cheekily mentioned that he was a fan of Manchester United, one of Arsenal's fiercest rival in the English Premier League and how Henry "played for the wrong team". Although this picture got a lot of "likes" on Instagram, there were a couple of comments from followers (presumably Arsenal fans), who were not too impressed. 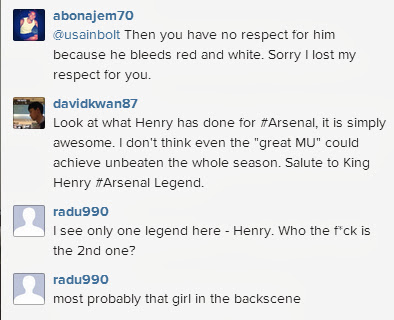 The only plus is that this is on his personal account and not for a particular brand. Imagine the PR nightmare the brand has to go through if this were to happen? However, personal or not, if you want to be a well respected ambassador for brands, you should not take sides let alone belittle the competition.

Posted by demonick at 8:44 AM No comments: