I was researching through some online viral campaigns to get some ideas that I stumbled across this brilliant viral video campaign.

If you don’t understand Cantonese, the video above shows a young girl who is pissed off at her ex-boyfriend for dumping her 3 months ago. Before they started dating, he used to pay for everything, and once they got together, they went Dutch, but she was still cool with that. The final straw was when he dumps her because her breasts were too small (AA cups). Later, she went for a boob job and now has C-cup breasts and taunts him that no matter what he cannot get to touch or get anywhere near those C-cups ever again.

Now, I must say, this is a very “hook, line and sinker” style of marketing. It build so much talkability and hype that it generated 700k+ views in just a matter of 10 days. The girls’ main intention here is obviously payback for him stereotyping girls with small breasts…or at least that’s what they want you to think. The second part of the video shows the ex-boyfriend who “responds” to her video.

Noticed I used the word “they”? “They” as in the company.

Now in retaliation, the ex-boyfriend looks a bit annoyed at what she has done (who wouldn't?). However, he does not believe she has C-cup breast and asks her to prove it. He says the only way she can get C-cup breasts in 3 months is if you take this (he then whips out the product that “they” were trying to sell). The Perfect C Breast Enhancer! That’s the product. At the end of the video, he even tells you where to get it by giving the website. Brilliant marketing don’t you think? It really shows that online viral marketing really does work!

By the way, the website is http://www.perfectc.com.hk/
Posted by demonick at 4:35 PM No comments: 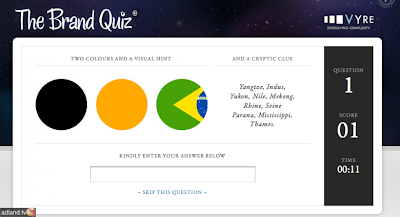 Try taking this brand quiz. It's a clever way to see how people associate color and imagery with some of the world's biggest brands. Each question will show 2 colors, which are the brand's corporate colors, an associated picture and a cryptic clue to enable you to guess each mystery brand. There is also a timer for you to answer all 21 questions in total. I only managed 15 out of 21. It's not as easy as it sounds trust me.

Click here to take the quiz
Posted by demonick at 7:48 PM No comments: